Yikes. Sometimes too much stuff happens, and I feel the need to post about it all. And if I don’t have time to write a post with everything, I just don’t. Or maybe I really do have time, but it seems like too much work… I’m not really sure. But I do know that it seems to be a vicious circle. Skip blogging for a week, then want to post about it all, but don’t have time/am too lazy, and it piles up. More and more… you get the idea. So this is a real mishmashed post trying to catch up on all the stuff that happened since I last posted… Fair warning, this post will be long!

If I were an organized person, I’d start at the beginning and work my way till now. However, organized I am not, so it’ll sorta be sectioned by category… to be honest I can’t ever remember exactly when half this stuff took place!

Fox has been feeling better, so I’ve been riding her. I’ve had some lessons (and non-lesson rides) and took her out on the trail.

Getting out on the trail was nice. My first lesson was good, but Foxy was very excited and fast. Very fast haha. Zooming around the corners of the indoor. I’m pretty sure there’s videos from that but I can’t seem to find them… Next lesson was good too, she wasn’t as zoom-y. However she was very very playful so I got dumped;

There were quite a few control circles, and the above one didn’t work. Lol. I am fine though! It was one of those annoying falls that I probably could have stuck if I’d sat up… I got back on and we did a small course without the oxers. She was extremely good that time. (Figures lol). Next day we had another lesson, but Fox was very tired!

on Saturday (like, not last Saturday but the one before that) me and Fox attended a local schooling show. It was very fun and Fox was fabulous. However the trail ride over was… interesting. We normally trail ride over, as it’s only about a 20 minute hack, and then our horses are pretty much warmed up when we arrive. Which is nice, because the warm up ring can be a little hectic… I have been run into before. Multiple times actually. but anyways, we were riding over, and then suddenly saw this:

yeah. That’s a big loud machine with a swirly blade on the end chopping up the trail…😳 I’m not really sure why it was working on a Saturday. But it was pretty much blocking the path, so me and Maren hopped off our horses in advance, because we weren’t sure how they would react. The last thing we needed was one of us falling off before actually getting to the show! Lol. We made it by with (surprisingly/luckily) little drama. The downside of dismounting… there is a creek running across the trail right after where the machine was. So we had to cross that before getting back on our horses. So our feet got wet. It was sunny though, so they dried pretty quickly.

Then came the ‘treacherous river’ or so it’s called. It’s really not that treacherous… but on the other side is the campsite/party area. So it’s always slightly sketch riding through, as there’s normally always going to be some people (awake or sleeping), dogs (friendly or attack like…) Buses, tents, cars, and/or lots of garbage/broken glass/nails, but you never really know what/who. This time it seemed to be a camp set up. Busses and such. It was actually better than most times, because the dog was contained inside one of the said buses, and there wasn’t broken glass/garage everywhere like normal… I didn’t see any people on the way over…

Once at the show, we jumped a couple of the warm up fences then headed into our first class, X-poles. Fox was fabulous. We had a few missed distances, and I totally missed the line for the last 2 jumps, but Fox was very very good. And I stayed on haha.

We did another round at 2 foot, and Fox was a very good girl, so we stopped there.

And I had another lesson yesterday, and she was perfect!!! ❤️🦊🦄

Now for Tanta; she is feeling much better! A week ago a video was send to our vet, and she said Tanta could do 30 minute walks under saddle for 2 weeks. (So 1 more week!) and then send her another video.

Tanta has really been enjoying getting out, so that’s nice!!

A couple weeks ago (see how behind on posting I am? Lol) it warmed up enough for me to bathe the ponies!! Which was amazing, because they really needed it! I’ve actually done Rasty again since then, because after his first bath he went and rolled right in the dust. And then he was worse than before I bathed him. I put a sheet on his after his second bath!

I’m glad I got those pony baths in, because a day later it was gross and really rainy for like a week. Wet and windy.

It’s actually lovely out today, but the forecast is calling for more rain so I dunno.

My lack of breeches was getting out of control, so I ordered a couple pairs that were on sale and I am loving them. LOVING them!

I’m am late posting this, but HAPPY BIRTHDAY FINN!! He turned 1… like two weeks ago. Sorry Finn! (March 28th was his bday!)

And the very exciting news!!! Daisy, our golden retriever, had puppies!! Coincidentally, they were born on March 28th just like Finn!

There’s 2 girls and 1 boy. We are calling the boy Tucker and the girls Goldy and Little one. The girl names were only temporary, to tell them apart. However Goldy has really stuck… lol. Maren has started calling her Marigold.

They are growing SO fast. It’s crazy. All of their eyes are starting to open now, and Little one’s are almost fully open already.

The ‘puppy room’ is also the tv room, and since I haven’t wanted to leave the pups, I’ve been watching A LOT of eventing and dressage. It’s been pretty fun… me and Maren’s new favourite is the dressage from badminton, because they put the movement scores up on the screen as it happens, and because the commentary is hilarious. ERM XC is pretty good too, and there’s lots of videos!

Here’s a bunch of photos. Because PUPS!! 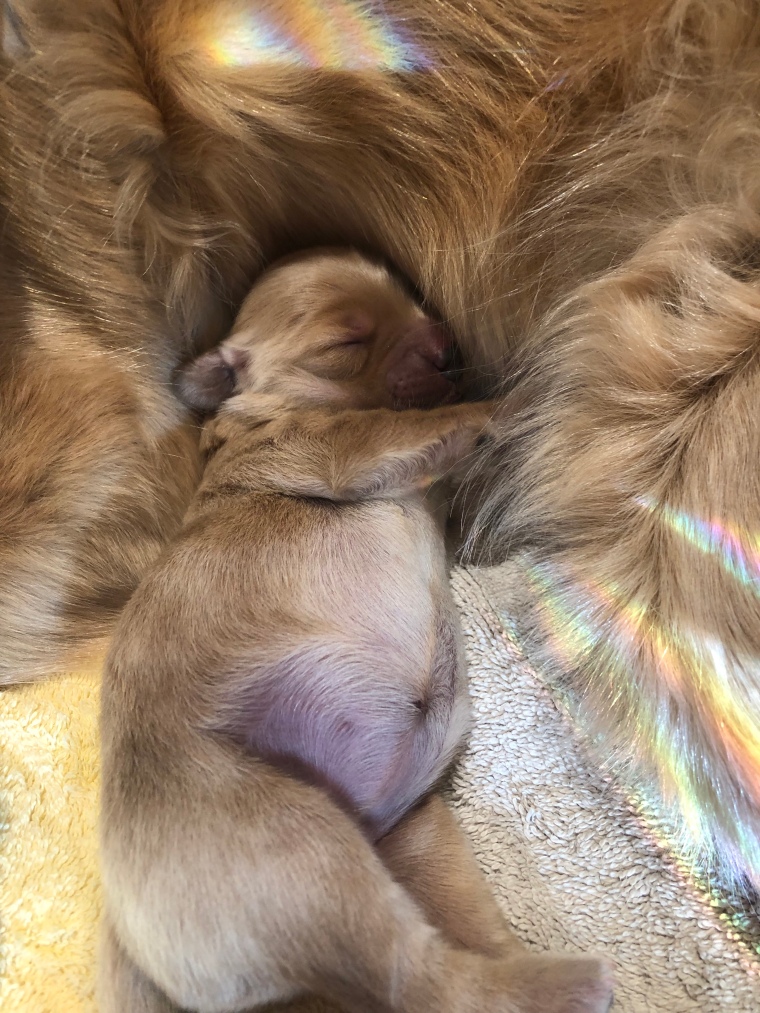 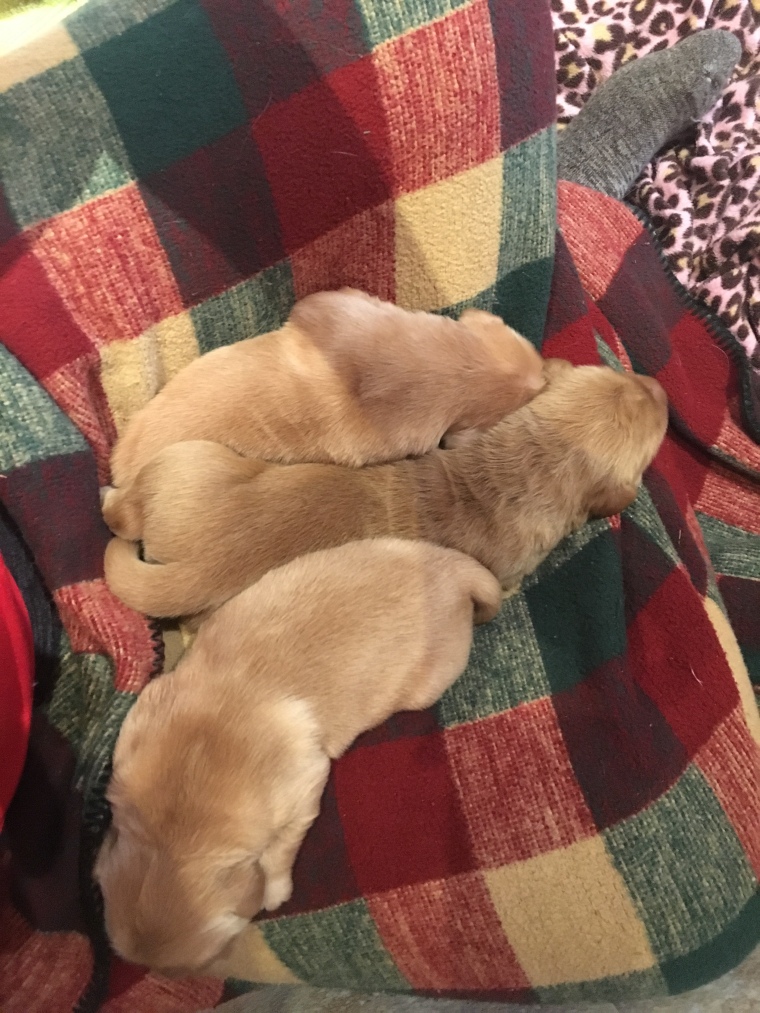 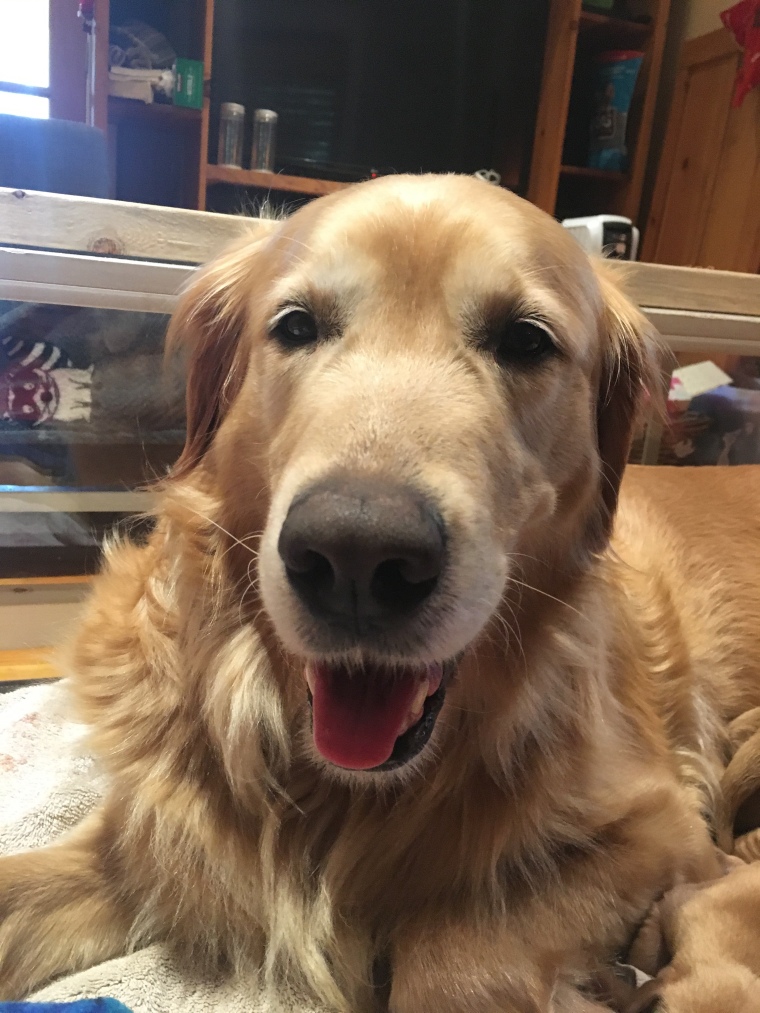 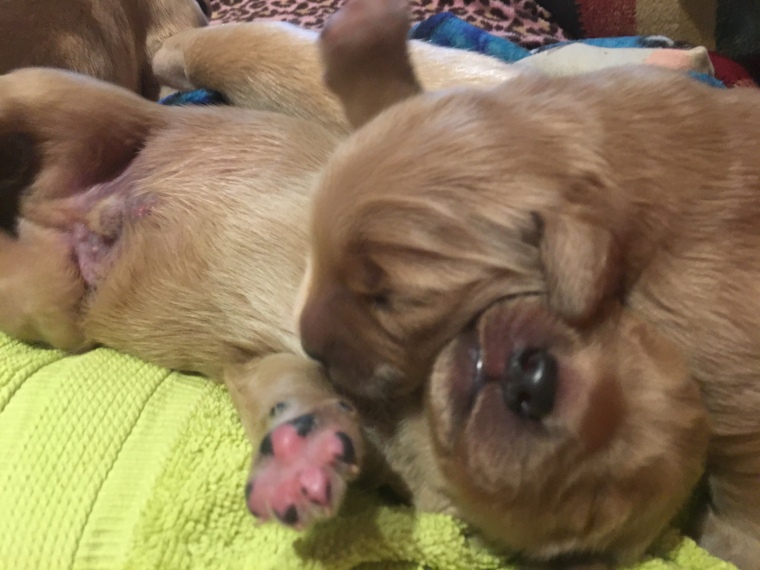 Oh and I’ve been dying stuff purple. Because… purple is the best colour!! I died a white cotton lead rope purple ombré, or I tried anyway.

I love it, but I think I left it in the dye for too long. About 1/2 way down the rope it gets as dark as it would go… so therefore it’s only half ombré. I would love to try again, with another colour perhaps. But I need to get more lead ropes.

I also did an old sunshirt I had. It was very pale purple, and I died it a dark purple… it turned out very nice but I don’t have a pic.

I also have a slight debate… awhile ago I ordered Tanta some colour elite Majyk Equipe XC boots. I loved them right out of the box. They felt sturdy and protective, but also very breathable and comfortable for the horse. I was planning on waiting till I was actually doing more riding/jumping with Tanta to try them out, however my impatience won out, so I tried the fronts about a week ago on one of her walks. They fit her perfectly, but when I returned to the barn they had spun around. *sad* I thought maybe I had just put them on too loosely. So I tried them again yesterday. I did them up as tightly as I am comfortable doing up her boots, but they still spun. *extra sad* and that was only a 30 minute walk. I guess I’ll try the hinds on today, and see if they spin. I am unsure if I should just try and sell them… but I do love them so that makes me sad… but of course I don’t want XC boots that spin. Hmmm…

So yeah. That’s about it I think… (seriously though, how many topics can I stuff into one post? Haha). if anyone has any experience with the ME boots, do they take a few rides to sorta mold to your horses legs or perhaps I’m better off selling them while they are relatively new?