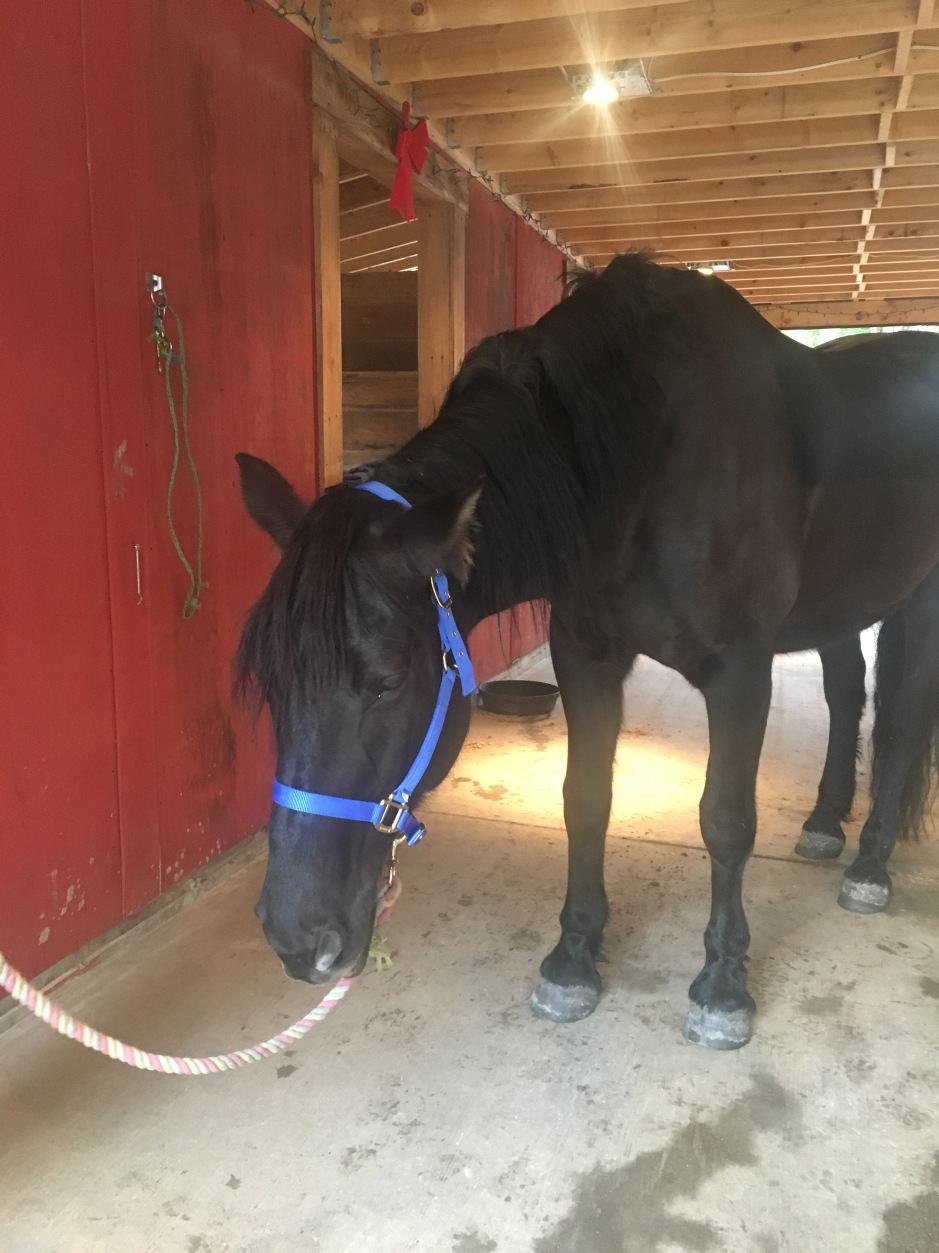 The vet came out yesterday to X-Ray Tanta. this was our first time meeting this vet, but I really liked her! (in this post I will call her Dr. M and our regular vet Dr. C… otherwise this will get confusing real quick! lol) She seemed very thorough and informative. we first explained what had been going on for Tanta, and then we trotted her on the driveway. I got Maren to trot her so I could watch her go as well, and she actually looked a lot better than the last time I trotted her, about a week ago. we then trotted her on the lunge line both directions and she still looked pretty good! not 100% sound, (same on the driveway) but a lot better. this was very encouraging! I haven’t really been trotting her, as Dr. C had advised against that, because we were not sure what was bothering her.

Dr. M said she would normally consider a nerve block, but Tanta wasn’t lame enough to necessarily tell anything from that! which I was honestly pretty happy about.  we moved onto the X-Rays. we did quite a few views of the right front… and they were pretty clear!! the sesamoids look FINE!!!!! *phew* and the lump looked like… nothing on the X-Ray, so it is not in fact “a bony Lump”. The only thing that showed on the X-Ray was a little bit of arthritic changes in her coffin joint, but that is nothing unusual for a horse Tanta’s age and it wasn’t anything extreme. Dr. M doubted that was the cause. so what was the cause of the lameness? we are not 100% sure. Dr. M’s guess was maybe soft tissue injury, and the lump is scar tissue, or maybe Tanta bonked herself and because she does have some arthritic changes, bonking herself could potentially make her go a bit lame…

we also had Dr. M X-Ray the lump on Tanta’s nose. and she thought it looked good!! although she did say that face radiographs are the hardest to read, and she would show it to someone else in her clinic to be sure! it sure did look confusing!

so the plan is this

week 1: stall rest but she can have access to 1/2 of a run out. (need to go put a board in the middle tomorrow!! or more accurately; have to get dad to do that tomorrow!) she can also hand walk for 5 mins a day.

week 3: Tanta can have a stall and a whole run out! hand walks can be 15 mins.

week 5: if all is going well and Tanta is *cross fingers* sound, I can start riding her on her walks. they can be 20 mins (ish) still.

week 6: same as above but walks can increase to 25 mins… this is exciting stuff!

weeks 7-10 as shown in the chart below. I get to add trot and canter in if she is all good still!!

so yeah! that’s the plan… we will unfortunately miss all the schooling shows I was planning… I’m feeling pretty bummed about that. but I am so relived that Tanta should be feeling better soon! annnnddd we should ready to go for the first event in May! so that’s a plus. 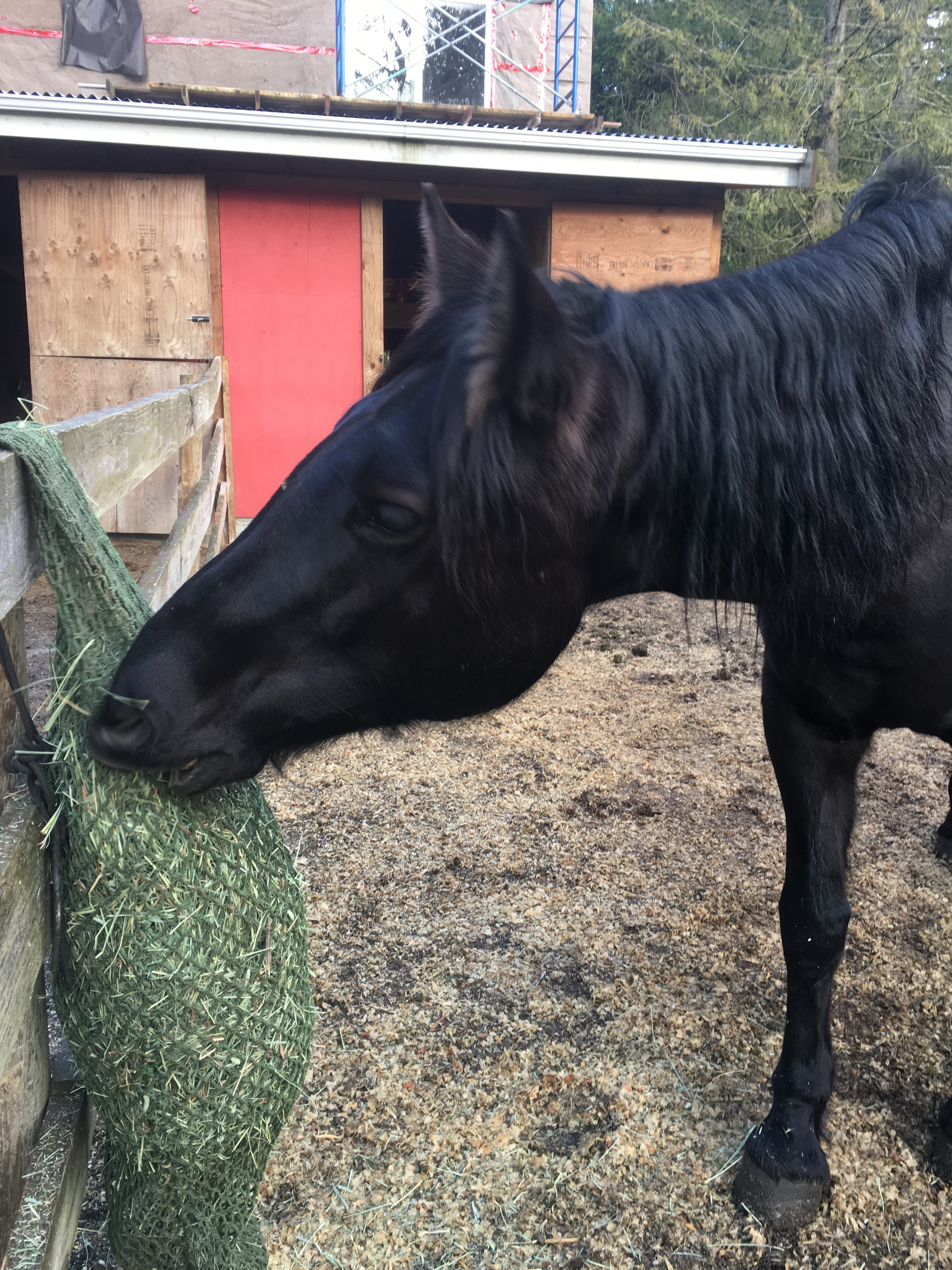 I took Rasty on a bareback trail ride today… he was feeling fresh! there were multiple times on our ride I wished I’d had a saddle on! in the driveway, he actually tried to play buck.  he only actually put his head between his knees and gave a small hop, but if I hadn’t pulled his head up… Rasty never bucks! lol. then I trotted him and Maren watched. I like to see how he’s doing lameness wise when I take him out, although he is always pretty much the same… he felt pretty dang fantastic! not completely sound or anything… but better than he’s felt in a long time. he was also sooo hyper on the trail! he was spooking at everything that he normally does not bat an eye at. last time Dr. C was here, she suggested putting Rasty on the same thyroid medicine as Tanta and Lilliput are on, to help control his weight. I’m wondering if that is making him fresh. but he certainly felt good! so when we got back home I hopped off and asked Maren to trot him so I could watch him go. she did, and he looked quite terrible. not worse than normal, but definitely not how I thought he felt when I was riding him! I do find it hard to compare how lame a horse is riding vs. watching from the ground… but this was fairly extreme difference to how he felt. so I hopped back on and trotted him for Maren to see. then I hopped back off and trotted his with me leading. strangely enough, he is way sounder when I am on him… that’s a little weird isn’t it?? I have never heard of a horse being sounder under saddle than when in hand… huh! I will have to research that! 🙂 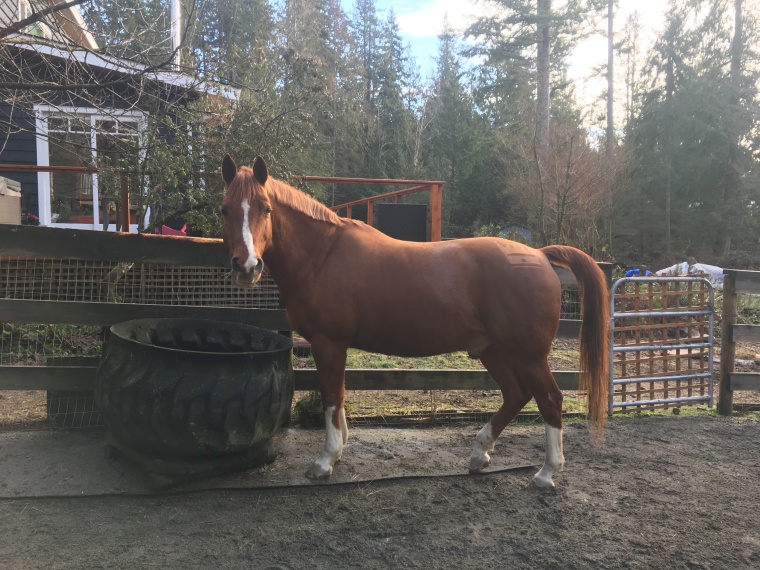