I’m back! It was a great weekend and I’m very pleased with how our tests went! Of course there’s things I would have changed, but all together pretty good!

we went to the vets on Friday, for Merlin to get his teeth floated and Rasty to see if they could figure out/treat Rasty for whatever is going on with him ☹️ Rasty got another injection… hopefully it works this time 🙃 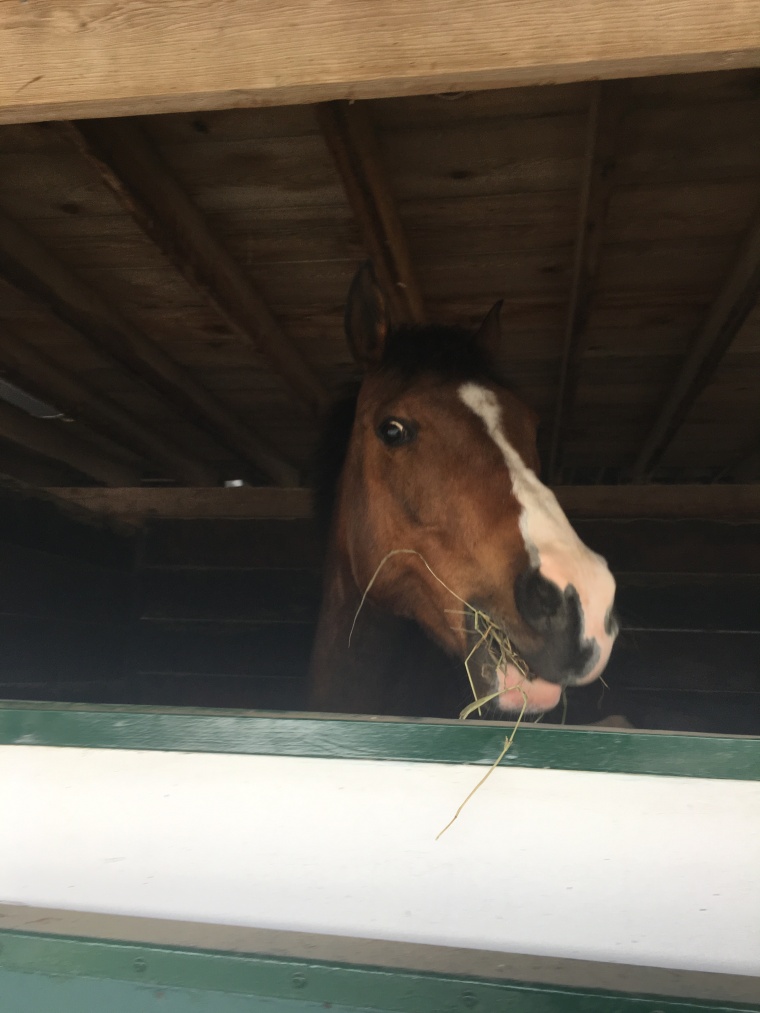 then we trailered to the first show. it was my first time at this place, and it was fancy!! There was a very nice barn for the horses to stay in, with very large, rubber matted stalls (which is great for Rasty as he sometimes gets hock sores) and it had automatic waterers! We still put up our buckets as our horses aren’t used to them and I didn’t want anybody not drinking while we were away. But still! Fancy.😎 there was even a lounge in the barn!

And it had a very nice indoor were the tests took place. With a indoor viewing area! That had free food!! And fancy TVs that showed the test! Anyways…

Theres a pic of Merlin’s stall (the doors do close, just letting him poke his head out)

when we arrived it was getting late and the indoor wasn’t open to ride in for too much longer. It had just started to sprinkle out, and I wanted to let him see where the tests were going to be ridden. So my dad tried to unlock our trailer tack room to get my saddle and look what happened!!😳

The key snapped in half with the bottom half wedged into the lock!!😲

luckily my dad was able to get it out with some pliers and we had an extra set of keys. Our practice ride was then very good other than the fact that Merlin and Rasty were constantly calling each other… no neighing in the test though. Phew.

The next day I rode a few tests and it went really well! Merlin was afraid of the judges though…😛 and I kept almost forgetting my tests… I just started memorizing them the day before and I’m the sort of person that gets lost even with someone calling my test😝 I was starting a leg yield on Center line and completely forgot which letter I was riding to… I aimed for somewhere between S and H. I got judge comments like “ride to the letters” lol 🤣

Lol. They were fine though, a little spooked in the beginning about the tarp roof but got over their fear awfully quick once their food was in there…😜

well, merlin did anyway, Rasty still wouldn’t go in his…

there was a puddle. And my princess horse doesn’t like puddles… that was before his bedding was in, he was a little happier with the bedding to soak up the puddle. Once we (finally) convinced Rasty that he’d be fine if he went into his stall, I was taking off his wraps and my sister was standing by his door which was resting closed (not latched though) and we also had a stall guard up! He pushed open the door and snuck under the stall guard! And ran right past us! He didnt get far though… he was trotting quickly away then got scared because Merlin wasn’t with him so he just sorta stopped… lol

our tests at this place were pretty good too! I was really happy with Merlin. he’s such a good show horse! He was super chill the whole weekend 😄 and pretty good considering I’ve only been riding him for max. 2 months. And before that 3 years off!

4 thoughts on “A successful weekend+Merlin is awesome!”